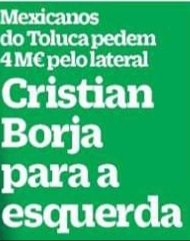 He is in his prime and has gotten some caps for the Columbian national team I believe. As a Toluca fan he was crucial to our run to the final 2 seasons ago. He is a better attacker than a defender, loves to run up the wing but has trouble coming back sometimes. He has scored some pretty good goals from outside the box. However, he has been going through some what of a slump lately. Idk if he is worth 4 million , it might be because he is the future of the Colombian national team.

In his first season, he hit the ground running. He was huge on the left side. We played a high defensive line with both fullbacks overlapping. He had a cut-in winger ahead of him for most of the tournament so he had the whole of the left wing available to him. He came up with a good number of important assists and his pace was usually enough to make up for his over-attacking at times.

His second season, he was getting call ups to Colombia, but his performance with the club began to fall a bit. He wasn’t as effective going forward and his defensive lapses were more frequent than before. It doesn’t help that our CBs are very slow either, but we gave up a lot of goals by counters. He finished this season not starting in the play-offs.

In his 1 year here, I’ve been impressed with him and thought it didn’t really make sense for him to be benched for these past playoffs. I think our main defensive troubles stemmed from our slow, underwhelming CBs and our insistence on a high line. If he makes the move, he could be a really good asset.

I think 4 million is a fair price for him considering the market nowadays especially at his age. He is a well rounded leftback. Loves to go forward, has a good shot for goal, knows how to stay in position with the back line. I rarely see attackers get past him. The only thing I would say he needs to work on is his crossing. It has left more to be desired But if he improves that aspect without a doubt, quality signing.