Botafogo Football and socioesportivo Tanks is a club based in the neighborhood namesake club in the city of Rio de Janeiro . Founded on July 1, 1894 under the name Club de Regatas Botafogo . Botafogo has the colors black and white . One of the most traditional clubs in Rio de Janeiro and Brazil celebrated its centennial on July 1, 1994 .
Nicknamed The Glorious applied by knockouts in the early twentieth century , the football team is responsible for more elastic score in the history of Brazilian football : 24x0 Sport Club on the hose . The Alvinegro often been the basis of the Brazilian National Team and is the record of calls , with 97 players called in general and also calls for 47 World Cups . After living a prosperous time shortly after its founding and have mastered the carioca football in the early 30s , lived its heyday in the 50s and 60s, when it was Tricampeão Roberto Gomes Pedrosa Tournament , a tournament which defined the best team in the Brazil at the time and the Brazil Cup Champion 1968 .

Holds the record for longest unbeaten sequence of national football:. Between 52 matches unbeaten, and 48 matches unbeaten in national championships in 1978 After winning the International Cup Tournament, International Tournament of Paris in 1963, 3 editions of the Cup club World Cup in 1967, 1968 and 1970, Conmebol Cup (forerunner of the current Copa Sudamericana) 1993 and the Brazilian Championship 1995, was voted by FIFA the 12th largest football club of the twentieth century. Competed in Serie B in 2003 and returned to Serie A the following year. Botafogo won the Brazilian entity the only champion in three different centuries, XIX, XX and XXI to win the Carioca Soccer Championship in 2006.

The Estadio Olimpico Joao Havelange, better known as Engenhão is a football stadium located in the city of Rio de Janeiro. It has the capacity to 44,000 spectators, all seated. It is also now known as one of the most modern stadium in Latin America.
Top Titles 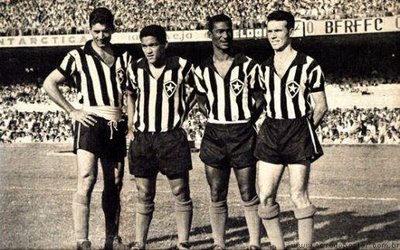