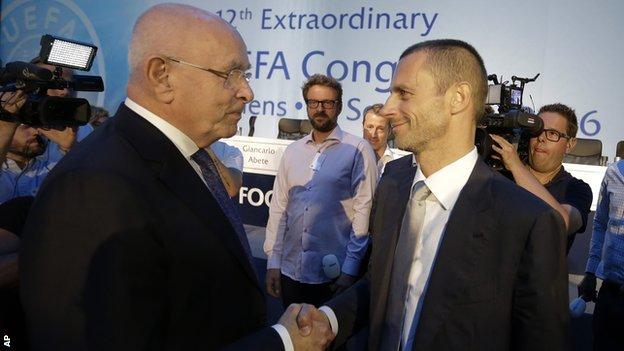 New president Aleksander Ceferin said Uefa must show Europe’s big clubs who is in charge as he made Champions League reforms his first priority.

Slovenian Ceferin said his organisation should show the clubs “we are the ones who are the governing body”.

Under the reforms announced last month, Europe’s top four domestic leagues will be guaranteed four places each in the group stages of the Champions League from 2018-19.

“It will be the first thing to deal with,” said Ceferin, who succeeds Michel Platini following his resignation after being banned from all football activity last year.

"Uefa is a very good, strong organisation. It was without leadership for some time and that was a problem dealing with this.

“We have to speak and have dialogue with the clubs and I think it can be solved.”

Ceferin, who has been the head of the Football Association of Slovenia since 2011, takes on the remainder of Platini’s term of office, until 2019.

He added there was “a lot of work to do”, citing match-fixing, security and safety, and racism as issues to address.

England’s Football Association last week declared its support for Van Praag, who - unlike Ceferin - is a member of Uefa’s executive committee.

The Scottish Football Association said it would vote for the Slovenian.

After the vote, FA chairman Greg Clarke said he was happy to work with Ceferin, and welcomed his his clear mandate.

"It is, by any measure, a meteoric rise to power.

"Aleksander Ceferin only took over as the boss of the Slovenian FA in 2011 but this election sees him become a key figure in European and world football.

"His first priority, he says, is to look at the recent changes to the Champions League structure and financial arrangements.

"This will be a thorny task. Europe’s big clubs have negotiated extra cash and group stage slots in recent weeks, a coup which has prompted anger from many smaller nations and leagues.

“His clear mandate will help. So too will the fact he was backed by nations of all sizes with big guns such as Germany, Russia, France and Italy all part of the 42 votes he amassed.”